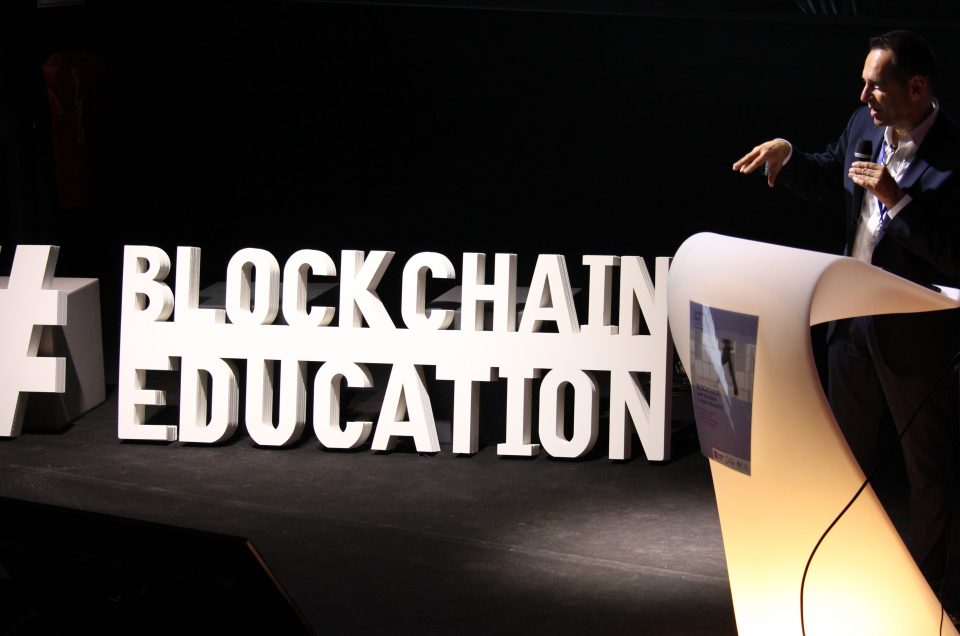 At the end of the Blockchain Credentials and Connected Learning Conference in Malta in May 2018, Alex Grech and Perrine de Coetlogon agreed to explore how to turn the event into an annual gathering of people interested in the affordances of the blockchain to stakeholders in education. The three day conference held between 27th– 29thMay in Lille, France  is the result of the ongoing collaboration between the Centre and partners with a similar interest in action research and praxis.

In Lille, experts from across Europe analysed the impact of blockchain technology on the education sector from unique perspectives, focusing primarily on use case studies and implementation concerns. Conversations regarding governance, legal principles surrounding blockchain and practical implementation of use cases took centre stage. In this series of blogposts, we will deconstruct the most salient aspects of the conference followed by a conclusion. Our first post summarises the bevy of practical blockchain initiatives (primarily in the digital credential sector) that are already active or in the process of being activated soon around Europe. 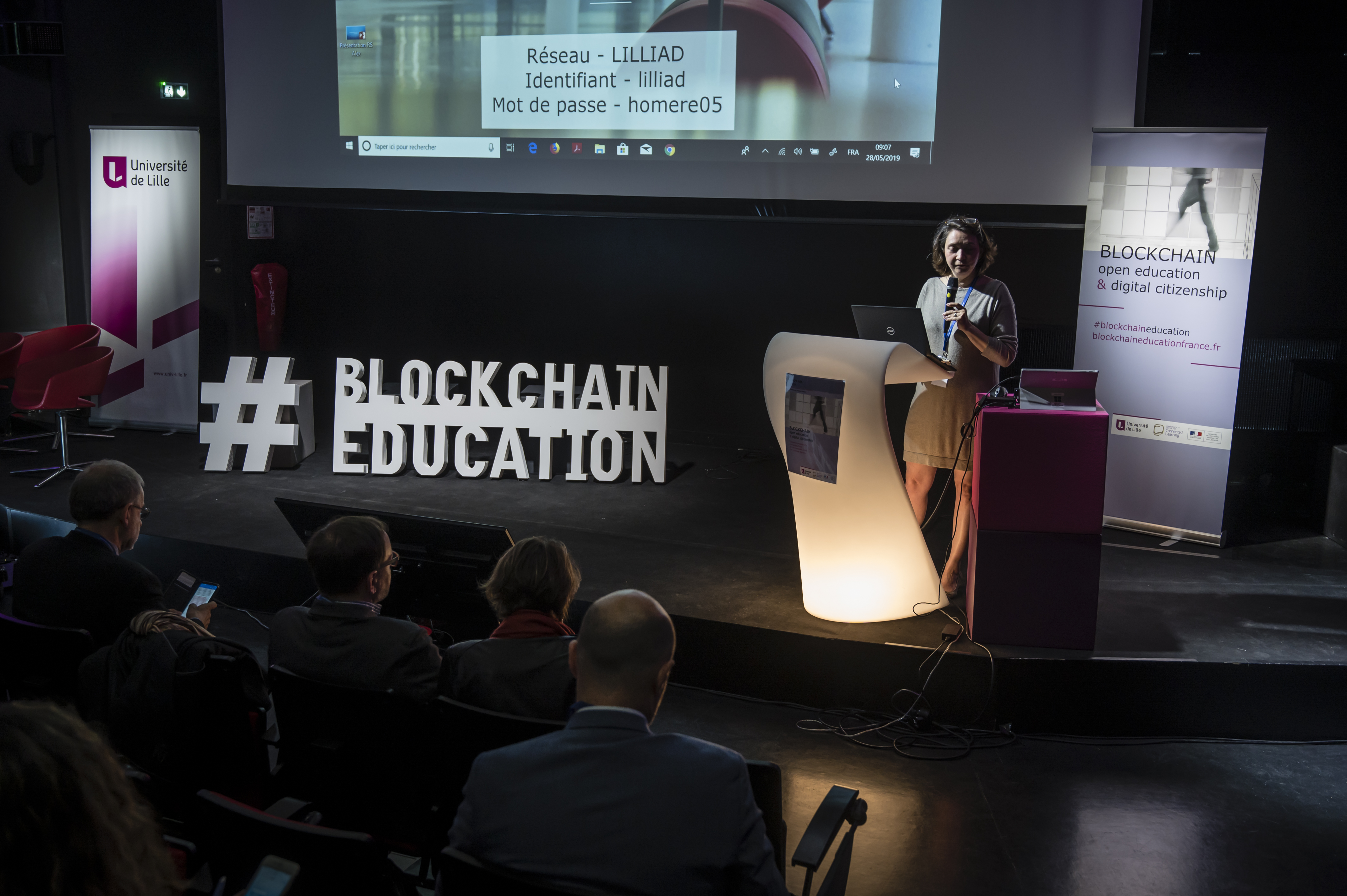 Julien Fraichot and Natalie Smolenski from Learning Machine presented Blockcerts, an open standard developed through collaboration between MIT Media Lab and Learning Machine. Blockcerts has emerged as one of the most commonly used standard for issuing and verifying digital credentials on the blockchain. Their ability to be used across multiple blockchain networks (Bitcoin, Ethereum, Hyperledger, Sovrin etc.) and interoperability across multiple identity platforms (LinkedIn, Twitter) and existing LMS (Learning Management Systems) puts them in a unique position to be universally recognised. Smolenski elaborated on Learning Machine’s nation state collaborative project in Malta, which became one of the first countries to utilise Blockcerts on a national scale to issue credentials. Smolenski said that Malta’s Blockcerts story had much to do with the simple need to address the skills gap by raising awareness on the need to account for lifelong learning and thus, trustworthy and verifiable credentialing. It is noteworthy how Blockcerts came into the picture once there was an already identified obstacle and organically developed into a solution to overcome it. This can serve as a significant lesson for entities that are looking at blockchain as a one stop shop solution for all their problems.

Alexis Berolatt ifrom BCDiploma, a French start up that has started issuing and verifying diplomas and certificates on the Ethereum Blockchain along with David Goldenbergof Brussels based CVTrust, which is issuing ‘smart certificates’ that may include educational certificates or letters of attestations were some of the exciting ventures that presented their products. Both  solutions are aimed at the global market, in sync with the demands of the present day global knowledge economy. While BCDiploma claims more than 25 customers on 4 continents and 10 countries, CVTrust has an equally impressive portfolio of partners from all over the world.

CIMEA (Information Centre on Academic Mobility and Equivalence), the official Italian NARIC center within the ENIC-NARIC network, presented their initiative ‘DiploME’(under development) that makes use of blockchain technology to digitalise and verify student credentials. DiploME is in line with another set of newly developed standards by the W3C community. It heavily relies on Smart Contracts for its execution and in its current status is compliant with all metadata standards in the existing Bologna and EU instruments such as Europass, Diploma Supplement, etc.

Hennie Bulstra from DUO, the Executive Agency of the Ministry of Education, Culture and Science in the Netherlands introduced the European Blockchain Partnership (EBP) which has been joined by 27 member states from all over Europe with the common goal of harnessing blockchain technology for improved governance across multiple sectors. EBP has come together to create the European Blockchain Services Infrastructure (EBSI) to support the establishment of cross border digital services in the public sector, based on trust. EBP’s vision includes a ‘bi-modal’ approach to innovation using blockchain where both short term and long term goals are harmonised and realised in conjunction with each other. The initial EBSI deployment plan consists of a few selected use cases, one of which is certification of diplomas and certificates. The EBP highlights the importance of having a large network of partners prepared to share real-world experiences while exploring the potential of blockchain technology through praxis. It is vital to have real time pilots in live scenarios to get a purview of the linked challenges and opportunities that this technology might accompany. 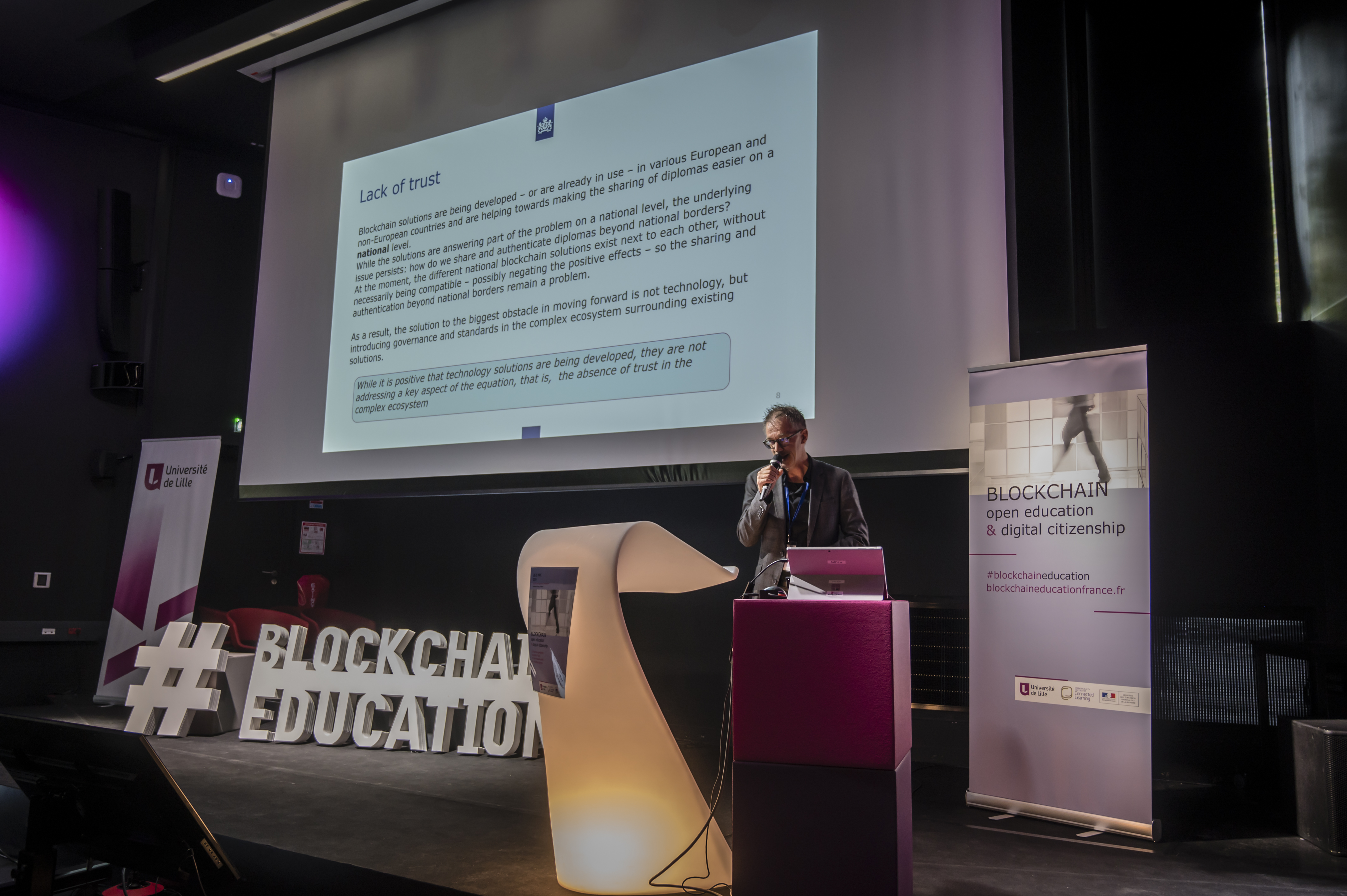 Hans Pongratz, the Chief Information Officer of the Technical University of Munich (TUM), Germany presented the Digital Credentials Initiative, supported by nine leading universities including MIT and Harvard University. The group aims to change the way universities manage credentials by introducing new standards that are globally adaptable. Mr Pongratz raised an important point about the need for a ubiquitous system that can be used worldwide by all universities instead of every university developing its own solution. The group is ultimately banking on the reputation of its individual members to secure support and eventually global adoption of such a system.

Andreas Wittke from Lubeck University of Applied Sciences presented Digicerts, another initiative by a group of German universities led by Fraunhofer FIT. The Digicerts Alliance has a goal to create a sustainable digital solution using blockchain technology that could enable global certification processes. They also aim to integrate it with Moodle for MOOC certificates, which is one of the most commonly used LMS. Prof. Wolfgang Prinz of Fraunhofer FIT further elaborated on this concept behind blockchain for lifelong learning passport. He listed GDPR compliance, need for certificates to be revoked and for users to be able to use them without logging into an account as FIT’s main priorities in order to lower the usability threshold. One of the significant revelations from Prof. Prinz’s presentation was the use of a use case evaluation canvas to identify the actual need (or lack thereof) for a certification system that is based on blockchain technology. Key discussion also focused on solving the issue of who will carry out the governance in such a blockchain network. Would it be the universities involved or the national certification authorities? This is one of the major question that remains to be answered.

John Domingue from Knowledge Management Institute, UK shed spotlight on the Institute of Coding project launched by Prime Minister Theresa May in 2018 in Davos. It is aimed at improving the employability of computer scientists in order to meet the rising industry demands. Backed by 33 British Universities and 81 committed partners from the private industry, this project centres on the use of non fungible tokens as a blockchain representation for open badges which are further issued to learners.

The European Student Card Initiative by European Commission consists of Erasmus Without Paper, EMREX and the European Student Card, all aimed at facilitation student mobility and recognition across HEIs in Europe. The initiative is further going to be linked to EU’s electronic identification regulations (eIDAS)for authentication purposes. The initiative is a major step towards creating a digital ecosystem where both HEIs and students can benefit from a simplistic identification system that saves time and is cost efficient in comparison to existing processes in place.

Sorin Cristescu from European Commission DIGIT provided an overview of the EU’s ongoing  pilot of European Financial Transparency Gateway (ETFG) that aims to create a system that becomes a single source of all the financial information from different member states’ OAMs (Officially Appointed Mechanisms) using STEEM blockchain. Participants will obtain faster results for the information searched by saving the time form having to go through 28 different portals but rather to a single entry point from a single distributed framework across the EU. Each OAM could run its own node via a small device with minimal costs.

A framework for the new digitally signed credentials under Europass2, being built as EDCI (European Digital Credentials Infrastructure) was presented by Angeliki Dedopoulou. The EDCI consists of four elements: eIDAS components, standards, software and services all of which are being actively developed at the moment. The first pilot is scheduled to be issued later this year.

In conclusion, we witnessed an array of different blockchain related projects and initiatives across Europe, each equally complex and multi-faceted. However, the eventual success of any blockchain based credential issuing and verification system depends on its mass adoption across HEIs within a common set of technical and legal frameworks and standards that are determined by a single agency. The continuous attention, interest and investment in the use of blockchain technology to indirectly enable lifelong learning may however, turn out to be the recipe for success.