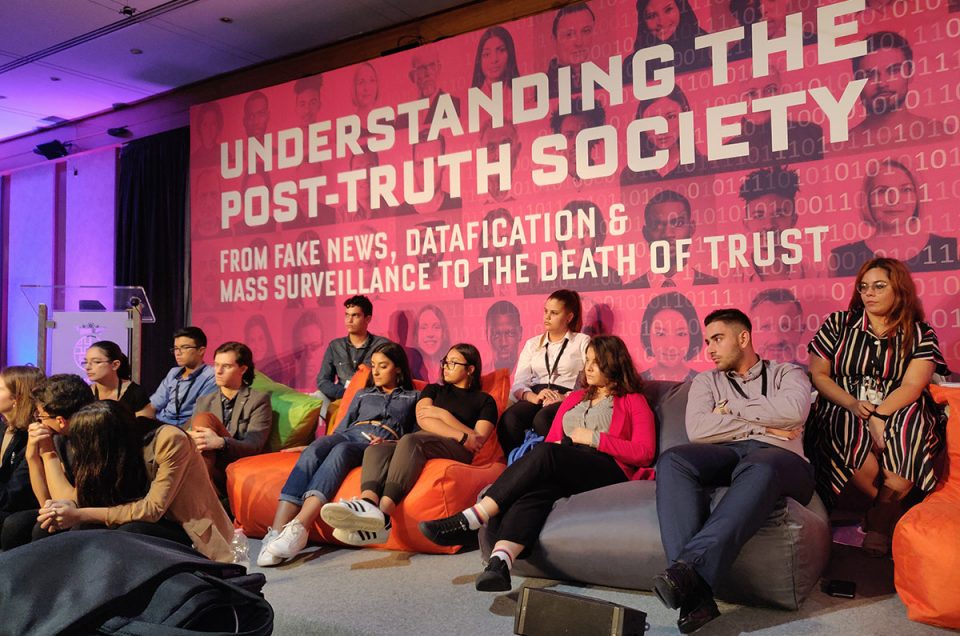 Following the thought provoking discussions on day 1 of ‘Understanding the Post-truth Society’ Conference at MCC Valletta, day 2 commenced with Learning Machine’s Natalie Smolenski’s talk focused on the role of decentralised technologies in an era that has borne witness to technological innovation of unprecedented nature. This has had a drastic effect on the fall of the costs involved in finding affinity groups creating gigantic ramifications on the evolving nature of communities of knowledge and purpose. One way to surpass the limitations arising out of being surrounded by such groups is by cultivating solidarity. As Natalie put it, 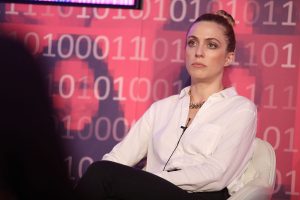 “Solidarity with human and non human actors as well as with ecologies that we are still incapable of understanding, can lead us to create common cause with someone or something very different from us. These commonalities if nurtured properly can give rise to the communities of the future”

Iranian-Canadian blogger Hossein Derakhshan shared his thoughts on a monumental shift towards the ‘post-enlightenment’ era, which is marked by three key changes: images have replaced text as the principal form of communication; move from reason and rationality to emotions, myths and effect; the collapse of public truth leading to the rise of ‘personalised truth’. The fortuitous ricochet of this shift has resulted in dire consequences for society across the board, especially for news media and journalism. He quoted American communication theorist James W. Carey to perfectly sum up the current debate on the relevance of news, “Journalism doesn’t just help democracy, it is democracy”.

Dr. Athina Karatzogianni expatiated along the same lines by including a conversation on the role played by digital transformation in this shift away from rationality and deliberation towards rampant polarisation. She raised a very important question: 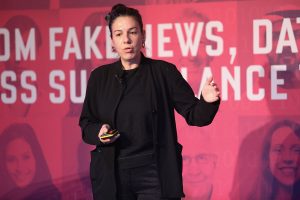 “Do we still have a digital public sphere or do we just exist in isolated bubbles?”

Online and offline participation when it comes to activism are two completely unrelated ideas and might not reflect each other’s equivalence. The backlash faced by activists, dissidents and whistleblowers for their activism from different spheres is reflective of the worsening stance towards collective action. Social media and government surveillance and its consecutive effects have given birth to a quasi-totalitarian society in this post-truth society.

Harry A. Patrinos from the World Bank focused on the role of education in precipitating change and solving some of the challenges that were discussed during the conference. According to World Bank statistics, the world is undergoing a learning crisis which is backed up by the fact that 51% of school going children below the age of 10 across the world are unable to read a complete sentence. Access to education and especially access to relevant and quality education will play a pivotal role in the coming years.

The last few hours of the Conference were utilised to initiate one of the most important deliberations that is largely missing from the ongoing discourse over the impact of living in the post-truth era. Dr. John Portelli from the University of Toronto chaired an hour long Young People’s Summit with students from University of Malta, MCAST (Malta College of Arts, Science and Technology) and St. Aloysius 6th Form College. The 3CL believes that our society is enriched and better outcomes are achieved when all the members of a community are involved in the decision making process, it is especially crucial to involve the youth in conversations that will affect their lives directly. The main discussions follow below. 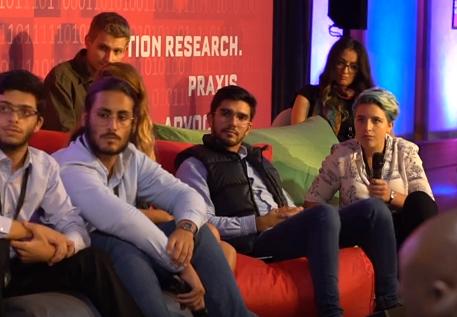 What is truth and why (or why not) it matters?

The discussion began with this pivotal question raised by Dr. Portelli for the students attending the summit. Students had a variety of views about the meaning of truth for them, some of those included: ‘Irony’, ‘Facts’, ‘Something Unattainable’, ‘Imagery’, ‘Interpretation’, ‘Consensus’, ‘Inequality’ and so on.

For many, truth matters because

The question of differentiating between ‘telling the truth’ and ‘being truthful’ was raised, with the example of Nazi Germany where the ultimate truth: a person’s right to live, was turned into something subjective and fell prey to collective truthfulness. Students offered their take on how to deal with differences when truth is not perceived in an objective manner, “When everyone has their own interpretation of truth, we need to indulge in honest discussions aimed at finding the middle ground with people who perceive it in a different way than we do”.

Role of Technology in the post-truth era

Even though technology has largely been perceived as useful in day to day life, it nevertheless contributes to a particular way of life where it becomes an extension of our own abilities, overruling our will to think and be critical. The tiny electronic devices in our pockets although helpful and easy to control, are also a burden. Some students believe that the notion of truth nowadays is owned and relegated by the powerful. One of the biggest technological milestones, the social web promised improved connection between communities, but it has ended up making us more disconnected and isolated than ever.

The principles of neutrality have been clearly ignored in the way most technology is designed and used today. The price we have paid is with the loss of personal privacy and in some cases with democracy and human life. Social anxiety among young people is as common as smartphone ownership and may even be directly proportional. However, some students believed that social anxiety has always been a part of human society, just that now technology and social awareness make it possible for people to reveal their issues instead of suppressing it as per tradition.

Technology does help us express ourselves and raise awareness, which might be a matter of life and death when it comes to communities that are a minority (Re: LGBTQIA community, climate change activists). At the same time it can be used as a means to fan populist agendas, create panic and cause persecution of endangered communities (Re: Rohingya community). Its important that one learns when and where to draw a line.

The younger generation has casually and commonly been blamed for their own social isolation due to over attachment to technology, but some of the students make a valid point that the vilification of technology may not be entirely fair, kids and young adults today face an entirely different barrage of roadblocks that nobody is prepared for. There is a lack of research and studies when it comes to manoeuvring their way through these uncharted territories.

Politicising student led organisations in universities and muffling student voices by those in power seemed to be the dominating discussion point. Not only does it limit the mental horizons of students threatening the freedom of expression but also stifles creativity. On the other hand as human beings coexisting in a society that is based on power dynamics, it is inevitable that politics seeps into education and its governance as well.

The power imbalance, climate of fear and the morality vacuum plaguing the world at the moment is something that needs to be taken up as a priority and everyone, especially the future citizens of the world should be made a part of the conversation.

Just like day one, the second half of the day saw delegates select one of several, separate panel to attend. Smaller cohorts enabled delegates to engage more actively with the conference themes. Below, we outline some of the key ideas coming out of the thematic panels on this first day of the post-truth society conference.

The last decade has witnessed the exposure of some major mass surveillance operations as well as massive data breaches carried out by both historically trustworthy and rogue governments as well as tech firms. Unfair, unfettered and unregulated harvesting of user data is crossing new barriers everyday, laying bare even more invasive methodologies to penetrate encryption. Countries signing MoUs to share unfairly collected citizen data with each other is the next step in this wrong direction which has turned into a reality. The only way to control this is to have mechanisms in place that can enable day to day oversight of governmental agencies.

Speaking from her experience as a public prosecutor, Chiara clarified that the ‘virtual’ crime scene is far different from a real life crime scene, mainly due to the lack of borders in the virtual world. The 2001 Budapest Convention on Cybercrime is an international treaty with 67 Signatories that enables sharing of civilian data with foreign governments to combat cybercrime. The existence of such a tool assists authorities in collaborating with each other to conduct criminal investigations.

The two points mentioned above are contradictory in some ways. While sharing civilian data with foreign governments may help in solving critical cases, it also puts privacy and personal liberty on the line. There is a need of oversight when conducting such operations. That may in turn slow down investigations by inserting bureaucracy and red tape which on some occasions could be a matter of life and death where time may not be a readily available resource. There is no solution for this accountability versus unfettered access debate yet. A Hybrid solution is needed: regulation needs to become smarter and efficient and technology can be instrumental to that aim. Technology can also enhance legal framework in civil liberty protection. Another idea is to experiment new regulation more often to test its effectiveness.

“Micro-targeting is effective because of the huge amount of data that online platforms gather. They operate a system that is called real time bidding. They call it programmatic and i call it problematic.”

“We should be afraid of people who claim  that they know the absolute truth. Atrocities have often been committed throughout history by those who made such claims”

“Businesses focus on profits and governments are driven by approval. Now they can influence each other directly. The only natural course is that they will shake hands. Profits also come from people, approval also comes from people. Unfortunately, the onus is on people to pressure on these entities”

Panel #6: Hacking the Post-Truth Society – an Education Fit for Purpose

“There is no denying that one of the roles of education is that of socialisation.  But it cannot be the ‘be all and end all’ of our education system. Likewise, it cannot become a commodity.  We are moving towards a neo-liberal model of education”

“Socrates was executed for corrupting the youth.  Surely it is time to bring philosophy right back to our curriculum. Education should disturb the peace and engage in the production of knowledge that is critical of the status quo – a necessary prerequisite for an inclusive democracy”

“Distorted communication refers to half truths, and claims that appeal to emotion rather than reason.  It is not new to the world. It is the choice of many ideological regimes”

“My idea is to use art to subvert reality and show that there exists several different realities, which are all based on how we perceive the image”

“There is a monumental shift of focus from text to images – but this results in a situation in which people consume images subconsciously, shallowly without perceiving emotions. People see images and become immune to them. Images lose their power to inspire action. We need to educate people about visual literacy”

“The notion of post-truth is nonsense because we have been using it for years. Post truth is impossible. There is nothing after truth, there is only a history of truth. Post-truth is a contradiction in the name itself. It does not exist. Post-modernism, on the other hand, makes sense, because we can see it. We are in a moment where reliability, trust, cultural capital  is vanishing. But there is no-time after post-truth”

Images and videos of the Post-truth Society conference available on our media gallery.