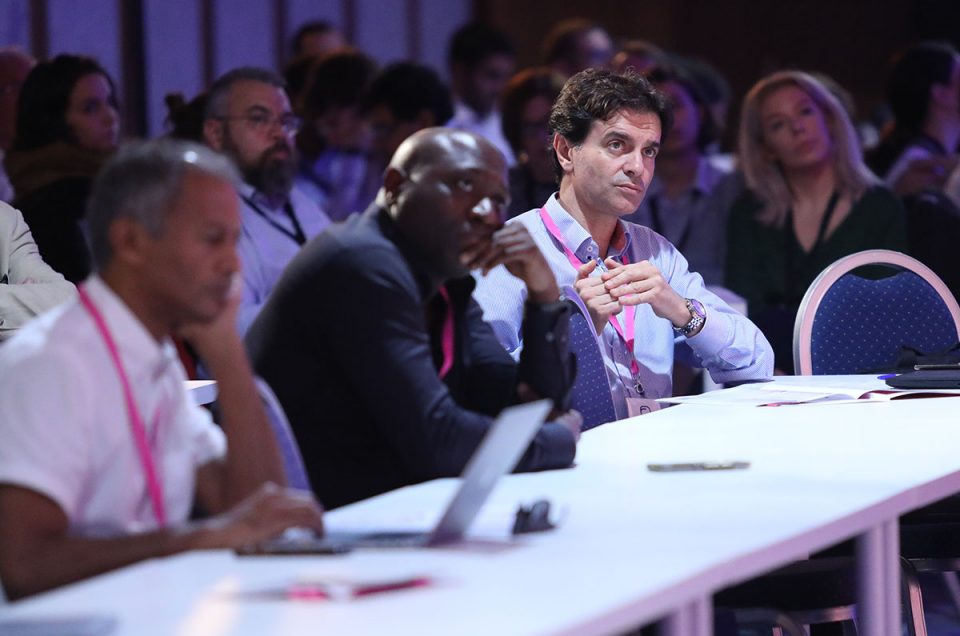 The Commonwealth Centre for Connected Learning (3CL) held a conference in Malta’s capital, Valletta, on 10-11 October under the title of ‘Understanding the Post-truth Society: From Fake News, Datafication & Mass Surveillance to the Death of Truth‘.

Attended by over 200 delegates from around the world, the conference was conceived as a platform for discussion, discourse and co-learning focused on exploring the meaning and role of ‘truth’ in contemporary society. The two-day programme was designed to give delegates space and time to not only engage with experts from interdisciplinary fields but also to help define a roadmap for the future endeavours to counteract the post-truth society. 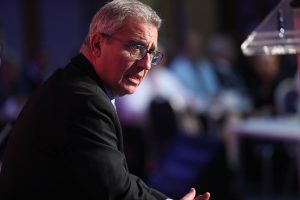 Minister Bartolo justifiably summed up the challenges of living in the 21st century, with all its opportunities and challenges: “We live in difficult times, in an age of disorientation.  We have lost our comfort zones; we try to recreate them, like nomads in the desert, trying to find our bearings”.

The Minister went on to discuss how disorientation, fear and the loss of the sense of self, exacerbated by political and economic agendas as well as constant use of social media feed into this illusion of seclusion to contribute to being one of the major challenges of our times. Initially overlooked, this loss of sense of self effectively manipulates the moral fabric of our society, giving rise to populist movements of a global scale.

The question now is who is to blame and is it too late to do anything in this normalised post-truth society?

As Minister Bartolo put it, ‘We are all collectively responsible for the murder of truth’.

There was a consensus during the post-truth society conference that truth has always been a social construct, albeit based on commonly-agreed upon narratives that are rooted in facts. The phrase ‘fake news’ occupied the hotseat throughout the event. Kenneth Cukier questioned mainstream media’s silent acceptance of the phrase as if it were a brand new concept and that there was such a thing as ‘fake’ truth. He pinpointed the loss of this teaching opportunity as the watershed moment that changed the way people perceive truth today. 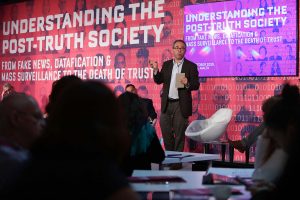 Knowledge sharing is a two-way street. When it comes to news, the responsibility lies not just with its architects but also with its consumers as they are active participants in how they deconstruct news, and in the way they absorb and process the information they receive. Interpreting what we read based on our own social biases, denigrating those who disagree with us and twisting the truth to fit our own perspectives have always been a part of human psychology.

Michael Casey brought the focus back to social media and its role in destroying the internet as it was originally envisioned: as a tool for openness and equal opportunity. In this ‘attention economy’ there is only one clear winner he said, the platforms that mine gazillions of bytes of personal data that doesn’t belong to them. Everyone else is a loser. The model needs to go back to the ‘engagement economy’ in which incentives for social good are inbuilt. 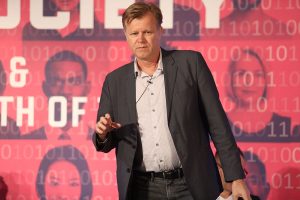 Could technology be the answer?

As Casey reflected, “technology is part of the solution but we also need to construct humanistic structures around it which will let us step out of the Matrix and collectively fix it”.

Vivian Onano highlighted the need to acknowledge the younger generation and especially women and refugees as among the hardest hit victims of this wave of collective loss of faith we are experiencing as a society. She offered education as the only valid solution to enable critical thinking. It was also crucial to create a safe space for dialogue among the sections of society which feel most excluded and the institutions that run the society, she said.

A panel on Media, Journalism and Fake News chaired by editor-in chief of Times of Malta, Herman Grech, appropriately followed the keynote session. Panelists comprised blogging pioneer Hossein Derakhshan, Associate Professor from the American University of Sharjah (UAE) Abeer AlNajjar, acclaimed photojournalist Massimiliano Fussari, internet pioneer Ruben Brave and Michael J. Casey. The session began with a round of presentations from some of the panelists, with each bringing a unique perspective on the role of different kinds of media on the discourse about truth.

Abeer AlNajjar called for journalism that is reflective, investigative and self regulated and is driven by community interest. The case of slain Saudi Arabian journalist Jamal Khashoggi was a stark reminder of the fragmentation that plagues the Western and Arab media. As she put it, “journalistic loyalty to people in positions of power is detrimental to the institution of journalism.”

Ruben Brave presented the idea of Make Media Great Again, an organisation focused on combating misinformation through meaningful and responsible annotations. He identified news media as the first shield that protects the populace from injustice; it therefore needed to be supported in its endeavor by all means possible. Human intervention through a group of diverse set of annotators is one idea among many that could contribute to ensuring this outcome.

The second part of the day saw delegates select one of several, separate panel to attend. Smaller cohorts enabled delegates to engage more actively with the conference themes. Below, we outline some of the key ideas coming out of the thematic panels on this first day of the post-truth society conference.

“People in general have lost sense of who they are, on the other hand there are some entities who know more about us than we know about ourselves. This is a dangerous trend.”

“The idea of the self sovereign movement is based in the foundational concept of being in control of what belongs to you. Blockchain technology could be one answer.”

“I am uber optimistic about the transformational capability of technology in the long run but in the short term, we have to deal with the boring stuff, we have to build the companies that enable the futures we hope for and learn how to fail and get back up. One must not underestimate the role of small players with radical ideas that can force the big players to play as well.”

“I would exercise caution against jumping on the techno utopia train. We must create a humane mechanism that can reflect the true nature of society as it is today, not tomorrow.”

“Technology takes us forward, it always has. But we need to keep in mind who are the architects of this new model and how broad is their approach. There is a big missing piece: We need people who understand identity, value and complex aspects of how human society functions.”

“Self sovereignty is not a trend, it’s a vital demand saying that the locus of personhood across state is leaky. There are too many holes for people to fall through and that is not an optimum situation in a civilised society.”

“Post truth is “the disappearance of shared objective standards for truth” but “we can never really be post-truth.” Sena Iling, cited on Wikipedia.”

“Today there is a huge risk that we are building a society in which the face-to-face communication is becoming replaced by data.  There is a risk that we will be de-individualised, and considered to be merely aggregates of data. Technological determinism, algorithmic bias, asymmetries of power between different stakeholders further the risk of manipulation. The answer lies in the need to uphold ethical values and embed them into technology.”

“Information literacy contributes to journalistic intelligence. We need learning with a purpose – not just open learning. AI and Blockchain are not the only solution – we need human skills to solve the truth problem.”

“The world is made of a set of facts. Facts are real. Now we have opinions about facts. Karl Popper speaks of theories, which are statements holding particularites. He uses the example of the black swans (there are no black swans until you see one).”

“The solution to climate change is to plant 1 trillion trees. We’ve cut half of the 6 trillion trees since the beginning of humanity. There are articles that have been communicating the solution, but it is not in the mind of the people. It has to be a global effort.”

Images and videos of the Post-truth Society conference available on our media gallery.