Michael Casey started his 2017 TEDx talk in Lausanne, Switzerland with this very question. As we approach 2020, the answer to that question is certainly yes. The next question to ask is how we managed to end up here.

In the late ’70s with the advent of post-modernism, broad-scale scepticism and the rejection of objective reality as a scientific concept began to take hold among academics and intellectual philosophers. For postmodernists, reason and logic became merely conceptual constructs and therefore valid only within the established intellectual traditions in which they are used[1].

Under this new philosophy, truth became relative, open to interpretation and dependent on the narratives offered by its architect. As this phenomenon spread its roots from philosophy and academia to journalism, politics and business, we witnessed a new wave of professions: the so-called ‘spin doctors’, ‘image consultants’ and, more recently, ‘social media influencers’ and their modifications. Facts were relegated to the background and commonly-agreed upon fiction took centre stage.

A three-decade career in media 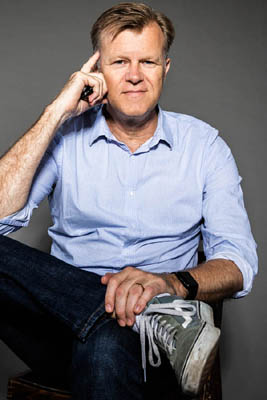 Michael Casey who has a 24-year long impeccable record as a journalist working alongside the likes of Anderson Cooper with thousands of bylines to his name (for The Wall Street Journal, The Washington Post, The Australian, The Harvard Business Review, CoinDesk and MIT Technology Review among others) has a solid argument to present in highlighting the collective loss of trust we experience as a society.

In his Keynote speech at Impact ’19 in Krakow, he talked about what it means to be ‘human’ in this day and age. Using the example of self-driving cars, which are essentially run by implementing a set of algorithms via code and the famous ‘trolley problem’, he deconstructs the idea of morality built into technology. Moral Machine, an experimental platform built by MIT Media Lab where Michael serves as a senior advisor and educator, attempts to gather multiple human perspectives on moral dilemmas in order to aid machine learning.

The constantly changing environment we currently live in where there is no correct answer to such dilemmas, calls for the need to create an understanding of the collective ‘hive-mind’ ability that humanity is capable of. Technology in itself is neutral[2], it is up to us to establish a set of rules that govern it irreproachably.

Casey’s 2016 book The Social Organism[3] eloquently paints a metaphorical picture of social media networks as mimicking the behaviour of continually evolving biological organisms. The book breaks down the tremendously complex system that are social networks into ‘memes’, similar to how biology can be broken down into genes. These packets of information serve as the foundation of our social DNA and inevitably use photos/audio/videos to alter the intellectual fabric of society en bloc.

Social media in its essence has become the most evolved supply chain network in human communication with no arbiters, which puts a great deal of responsibility on its users to employ it for social good.

Casey lauds the efforts of empathy driven social media use such as those by Brandon Stanton, the founder of Humans of New York, a photoblog capturing snapshots of diverse and extra ordinary stories of success and suffering of ordinary people. For every Brandon Stanton, there exist louder voices like Alex Jones and Laura Loomer[4] (among numerous others) spreading misinformation at an unprecedented rate.

The conversation comes back to the neutrality of technology and how its use or misuse depends on the way it is utilized. But what happens when the machinery operating underneath this tool of mass communication is rigged against the users in the favour of multi billion dollar companies that do not play by the rules? Mass algorithmic audio/video surveillance[5], micro-targeting[6], bulk data theft and harvesting[7], spyware[8], bots, and most recently social credit system [9]in countries like China are chipping away at user privacy rights. An average citizen ends up having no say in the matter and the few voices of dissent that exist, are buried by those in power. As Casey poignantly puts it:“We are already living in the matrix”.

The birth of corrosive distrust of each other and of institutions in general among the public has created large-scale cultural and psychological resentment of ‘the other’, creating an illusion of a perpetually impending threat. A lethal combination of radical misinformation and personally tailored ‘social media bubbles’ add fuel to this fire, polarizing communities beyond repair.

Casey reflects on a framework defined in Shoshana Zuboff’s book Age of Surveillance Capitalism, where managing integrity of the source data (sing decentralized technologies such as blockchain) has been identified as one of the key methods to survive this epidemic. 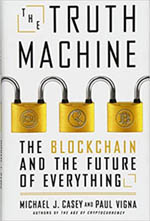 In his latest book The Truth Machine: The Blockchain and the Future of Everything, co-authored with Journalist Paul Vigna, the role of decentralized trust[10] in empowering people and restoring the power balance has been the main focus. The book serves as an excellent primer on the demystification of blockchain technology and how if used appropriately, it can restore control over personal data and in turn maintain the integrity of the digital ecosystem. In March, 2018 Casey in his position as the Senior Advisor at the MIT Digital Currency Initiative at the Media Lab contributed to a segment on Last week Tonight with John Oliver to explain the relevance of blockchain technology.

One thing Casey is sure about, is that the trust problem tormenting the globe needs to be resolved and status quo cannot be maintained anymore. For now, blockchain technology looks like a probable technology-based solution likely to aid in resolving this issue; it serves as a good starting point to set the ball rolling on this necessary conversation.

Join the Conversation with Michael Casey

Hear more from Michael Casey on this topic at the upcoming Commonwealth Centre for Connected Learning (3CL) conference on Post-truth Society in Valletta, Malta, 10-11 October. This conference is one of the few forums dedicated to encouraging discussion and formulating responses to deal with the rampant erosion of trust. It offers participants an inter-disciplinary platform to engage in exploring four interconnected sectors – Education, Technology, Media and Government – and to assess their roles both as solutions or contributors to the Post-truth society.

Join Us, Michael Casey and other keynote speakers – Reserve your Place >>